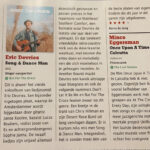 This is already the fourth solo album by songsmith Eric Devries. An especially intimate album where the Amsterdammer is accompanied by gitarist Janos Koolen, bassist Lucas Beukers, violinist Joost van Es and Sophie Janna on backing vocals. The twelve songs are nearly all acoustic and would fit in perfectly with Matthews Southern Comfort’s repertoire, the band that Devries was part of for the last four years. And that means friendly retro-country rock from the American West-coast, with meaningful lyrics and melodies that effortlessly find their way  into your consience. In ‘Another Round’ Devries takes a jaunty sidestep into Bluegrass and also the following songs ‘Don’t Let Me Be’ and ‘But For The Grace’ lean heavily towards this genre. Kind of in the vain of Chris Hillman and his Desert Rose Band from days gone by. There is, to be fair, nothing wrong with ‘Song & Dance Man’. On the contrary, it is without a doubt one of the best albums from The Netherlands in this genre this year. 4 stars out of 5